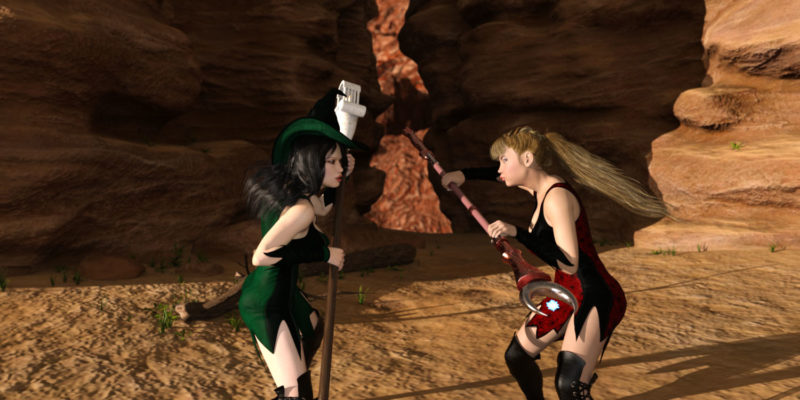 Today I wanna tell you my future plans about creating our adult games and I gonna tell what will release in the March. I always think – which way is better. What is the better – create a couple big games during of the year or many short games? How I told you in the article about types of the erotics games, I decided to choose a combined way. It’s means that we will creating a big games and short games as well. The short games will be for free and let you check the quality of our games. And if you will like our short games and if you’ll support us on the PATREON site, then you’ll get access to our toll games. Per month we will releasing one free porn game. How I told, mainly it will be games from the Sexy witch series.
At this moment I finish with a pictures for a game from the series about witch Zenny. This game – “Fight witches”. The coding has written a long time ago. The text of the game has translated to English. Now need to put the phrases in English in the coding. The game will released on the site in the March. Our friends who support us will get the access the first. Later, probably in one month, the game will be free. But may be I gonna make access to another game from this series – “Strip game”.
Also at this weekend Dworkin will write the script for one more short adult game. What is this game – I don’t know. He gonna tell us about this game later. Any way, this game will be much interesting than games, which I have wrote.
In according with this my intentions, the work with the Prequel a bit stopped. Last week I haven’t made a new pictures of the games. I just made a some little corrections after the Dworkin’s game checking. If everything will go how I want, I will continue the work with prequel in this weekend. The new texts has written and the coding finished. Now need to create a new pictures for the games.
In the beginning of the March the Yandex searcher lowered the Russian version of our site in the lists due to useless information and advertising. I hope our articles are not useless for you and you reading our news with interest. That’s why I have removed the pop-up advertising from the corner of the site. I guess, I will help. In my plans, the main way of the earning money from the site is supporting us our followers on the PATREON site.
So that’s why I don’t worry about earnings from this advertisement.
So this is today’s article. And tell us about your opinion. We really want to know what are you interested for.